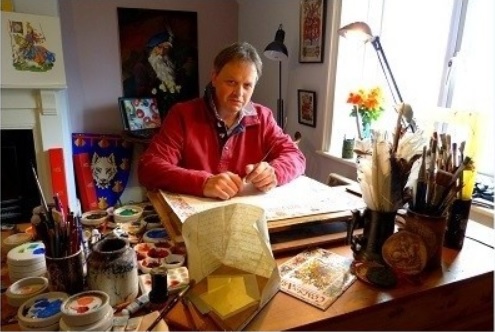 Andrew Stewart Jamieson in his Henstridge studio
Heraldic artist Andrew Stewart Jamieson of Henstridge has hit out at amateurs who steal work to create inferior coats of arms. In a blog that is causing controversy in the heraldic community he claims he has found elements of his work stolen for designs by a compiler pulling features together digitally.
Mr Jamieson, whose love of heraldry was fostered while he was a student at Gillingham School, writes that his stance has brought accusations that he is arrogant and high-handed.
But he said his criticism comes from his perspective as a trained professionalAnd he is urging people who want a coat of arms to take steps to ensure they are getting the quality they expect.
Mr Jamieson attended two art colleges, worked as an artist for the College of Arms for ten years, has worked for more than 30 years as a professional heraldic artist and is one of only three scribes and illuminators to the Queen.
His painting of Richard III won worldwide acclaim when the Richard III Society commissioned it following the discovery of the king’s remains in a Leicester car park last year.
But he warns that the profession is being damaged by people using clip art, digital techniques and stealing other people’s work to put together flawed and inferior designs.
In his blog he urges armigers - people who are entitled to use a coat of arms - to find out how their work would be created.
He writes: “Ask if they can draw and get it in writing that they have not used another artist’s work without permission as you do not want to find yourself trapped in the centre of a copyright dispute.”
He also warns armigers to ask themselves: “If I proudly display this will it be received as a credible coat of arms in certain areas of society or will it be sniggered at?”
Mr Jamieson’s blog at http://thejamiesonblog.blogspot.co.uk about his stance against digital manipulators has attracted thousands of hits.
He lives part of the year in Henstridge and also has a home in the USA.
Source: http://www.blackmorevale.co.uk/Richard-III-artist-Andrew-Stewart-Jamieson-takes/story-19626101-detail/story.html 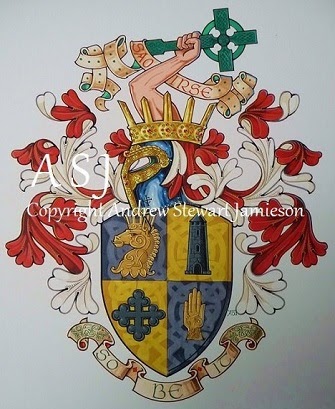