As Georgia's President Leaves, What Is Left Of the West's Victory In the Cold War? 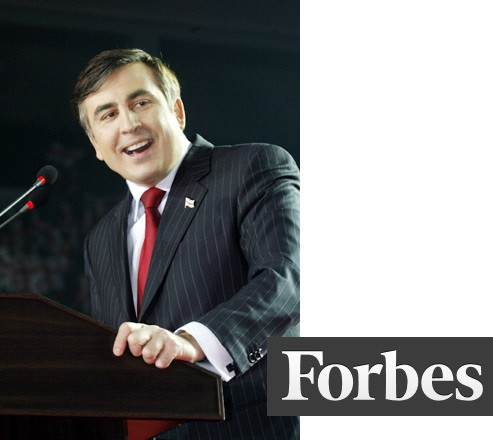 Why does it matter to the rest of us what happens in Georgia and environs? Answer: if the West cannot help an aspiring ally with dreams of joining Nato and the EU, cannot even protect it from Russian hegemony, what are we doing meddling in the Middle East or anywhere else? And if we can’t help Georgia, then what is left of the West’s victory in the Cold War?

I reported on the national elections in Tbilisi, Georgia, last October. On one occasion, I was shown a text from a politician of the party that won the election to a politician of the ruling party that lost (that of President Saakashvili). The text was nothing more nor less than a threat: the receiver should dump his affiliation to the President now, before the election, or face prosecution after. That entire campaign reeked of abuses and intimidation, above all by the opposition, but the world media only had eyes for the eccentricities of the billionaire challenger who owned zebras. The two sides spat poison at each other and it was a nice question as to who would win the besmirching match because whoever did would also clinch the outcome.  In the end, the oligarch Bidzina Ivanishvili’s side succeeded in depicting the country under Saakashvili as a fearful prison-like state by releasing videos of scary abuses in the prison system, even though evidence showed that a jailed mafiotic hater of the President had paid for the videos. I chronicled much of the chicanery in my Newsweek International cover story of the time.

I bring all this up because the Presidential term of Saakashvili ended a few days ago. Not did his party lose the parlaimentary elections last October, but now his party candidate also just lost the vacated Presidency to the party of the ‘eccentric oligarch’, Georgian Dream. Almost simultaneously, oligarch-turned-Prime Minister Ivanishvili announced that he would indeed retire from politics as he said he would a year ago when he took office. There was then, and still is now, a great deal to concern the media worldwide in his past and present – that the media has effectively skated over. Ivanishvili was widely accused of being a Kremlin stooge since virtually all his money originated from Russia. I’m no expert business reporter but I remain astonished that no one in the entire global media probed this matter fully. How could anyone, as Ivanishvili did,  liquidate his holdings in strategic Russian energy companies as easily and quickly as he did without the Kremlin green-lighting it? Nobody had managed this before. Buyers had to be found quickly, approved buyers who could be trusted to deploy their shares according to Kremlin needs. Funds had to be released. Nobody knew exactly how much or by whom but it allowed the oligarch to claim he no longer had Russian holdings, and it allowed him resources aplenty to fight and win the elections in Georgia.  It’s worth asking, would any western politician be granted such an EZ Pass by the media?

Then again, what does it mean when a political leader puts together an opposition party with no other avowed program than to unseat a President –  that the Kremlin regards as its enemy number one. And now that the President has left, Prime Minister Ivanishvili feels his own job is done. How is it that no responsible commentator in the West, amid all the recent hubbub of reporting, takes him to task over the sheer irresponsible dilletantism of such conduct – where is his patriotic concern for the country’s longterm wellbeing, where the devotion and dedication of seeing the job through? Instead Ivanishvili has nominated for Prime Minister the man who once presided over his art collection and charitable funds, Irakli Garibashvili, the same man he made Interior Minister when he took power. Finally, some murmurs here and there have begun to erupt that Ivanishvili wants to rule stealthily behind the scenes – with all the power without the responsibility. Now why would he want to do that?

I conducted a long interview with henchman Irakli Garibashvili during that first election race a year ago. What emerged above all was his implacable animus toward President Saakashvili. That seemed to be his only activating impulse – beyond that, no vision, no policy architecture. Garibashvili told me a long tangled story of a relative who was arrested for carrying armaments in a car. The weapon was planted by the police, he claimed, and anyway was a laughably clunky old rifle or somesuch. I had no way of checking the story fully but the sheer authentic passion of his ire impressed me.  And truth be told many Georgians felt angry at Saakashvili for his iron-hard law-enforcement, backed by ubiquitous surveillance. Many felt he abused the system for political ends. Garibashvili believed that the government was really sending him a message via his relative to stay out of politics. No matter how the truth lay, you’d think that once in power he and Ivanishvili would act differently. Certainly they have amnestied hundreds of prisoners, some 200 for being political prisoners. The crime rate has duly spiked but leave that aside. They have pursued a relentless prosecution of former Saakashvili loyalists and politicians especially at the municipal level, often inciting mobs to intimidate and harrass opponents in the Russian fashion. In effect, by their own criteria they’re as bad as Saakashvili only without the sense of purpose or the results. The economy has sunk from 8 percent growth to 1.5 percent according to a Businessweek article by Helena Bedwell on November 2. Meanwhile, the Western media, hating no one more than anyone on their side, cuts the Georgian Dream-ites all manner of slack while continuing to excoriate Saakashvili, the most loyally Western oriented politician in recent years.

A particularly egregious example of such anti-Saakashvili bias can be found on the ‘Foreign Policy’ website from October  29 by Brit journalist Thomas de Waal, a Carnegie Endowment expert on the Caucasus. It’s entitled “So Long Saakashvili” and subtitled ‘A Presidency that lived by spin – and died by it’.  The article’s thrust can be simply put – Saakashvili loved to grandstand in foreign capitals and for a while he persuaded innocent foreign leaders of his virtue while abusing power incessantly at home. His greatest achievement in office was the leaving of it democratically. The article is so virulently one-sided that it borders on charlatanry. The Augean clean-out of corruption, the transformation from failed state to functional services, the eradication of vast crime networks, the renovation of the cities, the booming economy during a global downturn – scarcely trivial achievements – rate three lines in the context of Saakashvili’s ‘early success’ in a long, long, article. Instead, we are told that in the last year ‘Georgia has become for want of a better word, more Georgian’. By which de Waal means a more prominent role for the church and the return of the Stalin cult. Literally. One wonders how Georgians will take that insulting profile of themselves. And Georgia’s sympathy for Stalin is presented as more evidence of Saakashvili’s arrogance because he failed to gauge true national sentiment – rather than crediting Saakashvili for trying in this, as in many things, to change bad old habits, and suffering a dark backlash , one stoked venomously by Ivanishvili and his ilk.

The fact is, if Saakashvili exerted too much power to transform his country in a short dash to modernization, I’d like Thomas de Waal or anyone else to show how else it might have been done. True, entire generations above ages 40-45 were deliberately shunted aside, they having been trained under Soviet conditions and standards. They remained always resentful of being disempowered. Academics, jurists, intellectuals, broadcasters, traffic policemen, civil servants, generals, plumbers, an entire self-important slice of society had to be discarded to make way for a younger generation with a different world-view and different work habits – and indeed a different geocultural orientation toward the west away from Moscow. Their elders had grown up under conditions where bureaucracy, mafia, tribalism and nepotism fused to make a society cohere. Such elements were always going to obstruct renewal all too effectively, as indeed has happened in other post-Soviet regions. Mafias of any kind are severely resistant to change. For that reason, law enforcement became a prominent and pivotal factor.

The real issue though is a far bigger one than de Waal and his ilk comprehend, bigger than Saakashvili or for that matter Georgia itself. What nobody understood, and most people still dont, is that Georgia like the Middle East, Russia and other countries, is being pulled apart by the polarity between globalism and the nation-state. Saakashvili believed devoutly in ushering Georgia into the global sphere with greater market efficiency and all its entailments – competitiveness, transparency in business, greater productivity per individual and the like. Above all, the transformation demands a kind of color-blindness. If women work harder, they get the jobs, a sure recipe for turbulence in patriarchal societies like Georgia. If a steel magnate from, say, India pays more for a Georgian steel plant he gets precedence over a local owner. So you drift inexorably toward a gender-neutral multicultural meritocracy. This globalized system may quickly make the country richer overall but it also realigns organic social structures. Its virtue and biggest flaw is its impersonal nature.

Now remember that with the Soviets’ demise, many countries for the first time in decades felt they had got free of impersonal systems. They felt they could finally become idiosyncratically themselves. If that meant being lazy, religious and patriarchal, then so be it. With the advent of democracy they had the right to prefer that. Thomas de Waal gets it right in saying that Georgia has become more Georgian under Ivanishvili but he’s being intellectually dishonest not to tease out what that means in the bigger picture. He would rather play at ad hominem political horse-race comparisons between personalities. Underlying the national vs global polarity sits a contradiction at the heart of conservatism that no one has yet addressed. National tradition and global competitiveness often don’t go together. Vladimir Putin has cannily pushed Moscow’s pro-conservative image around the world, nearness of church and state, marginalizing of minorities and the like. He has found a sympathetic reception to his new doctrine in many places that would otherwise be highly suspicious of Moscow, places such as Hungary and even Georgia. Saakashvili, for his part, worked miracles in his own country but he was up against a global backlash against globalization, a force he couldn’t begin to fathom because his model – the Western wolrd – hasn’t begun to fathom it either.